Executive Director, Tim Ready, has a background in national sales, marketing, and operations positions with Fortune 500 companies and ownership of a small business. Tim took his experience and skillset and embarked on his journey into senior living (alongside his wife) in 2014. Appointed as Executive Director of TerraBella Myrtle Beach in 2015, Tim has been focused on a resident and associate centric approach by always keeping them the “North Star.”

Tim has been recognized as the “Executive Director of the Year,” served three years on the Executive Director Advisory Council and served as a Regional Captain the past two years. He is proud of his team and their successes. The community received the 2021 “Caring Star” award and has been recognized as a “Great Place to Work” the past three years.

Myrtle Beach is a fantastic place to live, work, and retire. During his free time Tim enjoys sampling all the area has to offer from restaurants and entertainment to golf. He just celebrated his 37th wedding anniversary and became a grandfather in 2021.

Assistant Executive Director, Tiffany Lester, began her career in senior living in 2005 while finishing her final year of high school. Upon graduation, Tiffany pursued an education in Interior Design while taking on new responsibilities in various positions within the community. Feeling that she found her calling, she chose a career in senior living. During her tenure she has held more than five different job titles, from Housekeeper to Assistant General Manager and looks forward to advancing her career in the senior living industry.

Over the past 15 years Tiffany has found tremendous satisfaction in helping the hundreds of grandparents to live better and more fulfilling lives. In 2018, Tiffany was awarded Assistant Executive Director of the year and has won the coveted “Touch of Excellence” award two times during her time with TerraBella Myrtle Beach. On her off time, Tiffany has a second full-time job where she is called mom, mommy, mama, and everything in between. She enjoys family vacations with her husband and two little boys, shopping and a rare quiet moment spent with a glass of wine.

Penny joined TerraBella Myrtle Beach as Senior Lifestyle Counselor in 2022 and brings over 15 years of experience in hospice and senior care to TerraBella. A native of West Virginia, Penny moved to Conway and has resided in South Carolina for the past 23 years. Having been trained through the Alzheimer’s Association, Penny is passionate about serving our seniors and helping them achieve the highest quality of life.

In her free time, Penny enjoys spending time with her children and grandchildren cooking, crafting, and reading. She also volunteers locally with several senior organizations.

Executive Chef, Ryan Mack, began his culinary career at a major hospital in Southern New Jersey where he learned large scale food preparation, adherence to dietary requirements, and the importance of health & safety in dining services. Originally from Jackson, NJ, Chef Ryan relocated to Myrtle Beach in 2006 and expanded his culinary knowledge while working at several casual dining venues. He joined the culinary team at TerraBella Myrtle Beach in 2010 and was promoted to Executive Chef in 2014.

Ryan has been named “Executive Chef of the Month” multiple times and prides himself on providing a satisfying dining experience to the residents and coaching his team while balancing the administrative requirements of his position. Chef Ryan has a passion for smoking meats, creating his “award winning” pumpkin chili, and enjoys the challenge of preparing special meals for celebratory events.

For relaxation, Ryan and his wife, Amanda, enjoy music of every genre, attending music festivals, and getting inspiration from sampling menus from locally-owned restaurants. 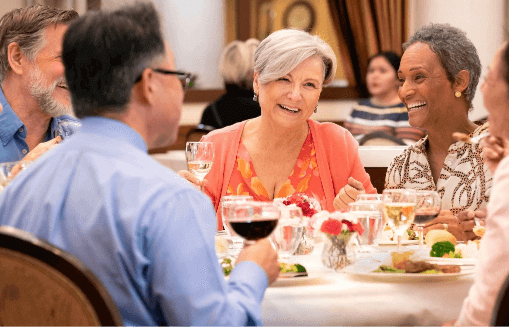